By: Usman Shabbir & Yawar A Mazhar

In the 1950s Pakistan aligned itself with the United States of America under the newly formed SEATO (South East Asian Treaty Organization) and the later British sponsored CENTO (Central Treaty Organization) security pacts formed to contain the former Soviet Union. As part of these pacts Pakistan was recipient of a Mutual Assistance Program (MAP) which formed the basis of Pakistan Air Force (PAF) being re-organized on modern lines based on the model of United States Air Force (USAF). Over the late 1950s and till the middle of 1960s, PAF was equipped with American aircraft like the F-86 Sabre, T-33, T-37s, C-130s and B-57s. Under this arrangement Pakistan also allowed United States basing rights for U-2 reconnaissance aircraft missions. In May 1960 it was during one of these missions that a U-2 aircraft piloted by Gary Powers was shot down over the Soviet Union. It was after this incident and subsequent Soviet threats to Pakistan that the US agreed to provide Pakistan with higher performance fighter aircraft. The choice ultimately settled on F-104As after PAF’s refusal to accept an American offer for F-100 Super Sabre aircraft.

A total of 12 F-104 Starfighter aircraft were transferred to Pakistan, including 10 A and 2 B models. The model numbers and USAF tail numbers (retained by PAF) are given in the table below.

All the aircraft were ex-USAF Air Defence Command and were equipped with the 20 mm M61 Vulcan Gatling gun besides being able to carry AIM-9B Sidewinder air-to-air missiles on wingtips. All aircraft delivered were also equipped with the C2 upward firing ejection seat and higher thrust General Electric J-79-GE-11A engines.

The first three pilots selected to undergo type conversion in the United States included Sqn Ldr M Sadruddin, Flt Lt Mervyn Middlecoat, and Flt Lt Alauddin ‘Butch’ Ahmed. Sqn Ldr Sadruddin was sent to George AFB, California (east of Los Angeles) and spent time with 434 TFS, 479 TFW. This was part of “on the job” training as an executive officer for a squadron for 6-7 months. Towards the end of the stay he transitioned to F-104s and flew about 22 hrs on the aircraft while in the USA (4-6 hrs on dual and rest solo). Since the F-104As in US service were nuclear weapon capable, USAF considered stripping the aircraft of this equipment before allowing Sqn Ldr Sadruddin to go solo but later decided against this. During this timeframe Sqn Ldr Sadruddin also became the first Pakistani to fly at Mach 2. The other two pilots went to an Air National Guard unit in South Carolina for type conversion. The fully assembled aircraft were sent by ship to Pakistan where they arrived at Karachi harbour in August 1961. 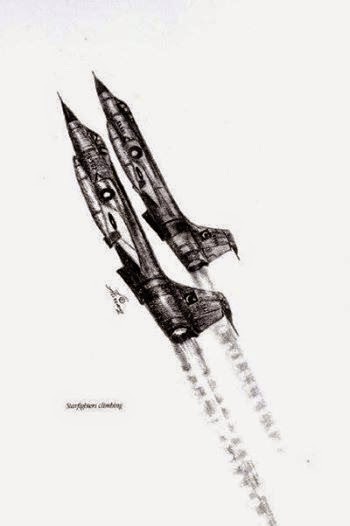 Before these newly delivered Starfighters could scream through Pakistani skies at Mach 2, they had to undergo a more mundane journey i.e. travel on Karachi roads from the harbour to PAF Station Drigh Road (now called PAF Base Shahra-e-Faisal). This was done by towing aircraft with tractors during the night, with pilots sitting in the cockpit during this journey to apply aircraft brakes if necessary. The time also marked the arrival of USAF test pilot Maj. Swart Nelson who checked out the three PAF pilots after which the aircraft were ferried to PAF Station Sargodha (now PAF Base Mushaf). 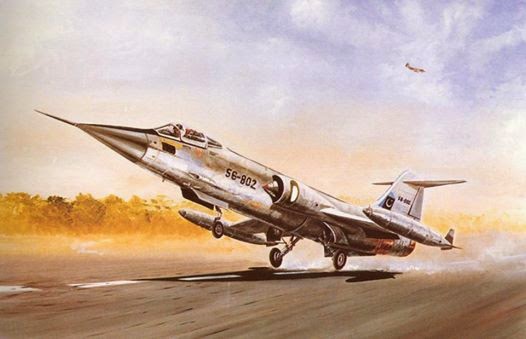 While writing about the Starfighter story, Wing Commander M.L. Middlecoat described the arrival of the Starfighters in these words: "At about 1500 hours on 15th September 1961 two silver streaks were seen moving across the Sargodha sky, leaving behind them thick white contrails. Covering over 15 miles a minute the streaks turned into specks and then faded altogether. Suddenly, the silence was broken by two thunderous bangs shaking window-panes and doors. Three minutes later, the specks reappeared, this time at tree-top level flying along the length of the runway. The specks turned to streaks which suddenly went into a near vertical climbs and within seconds, had changed back to specks leaving behind their tell-tale contrails." 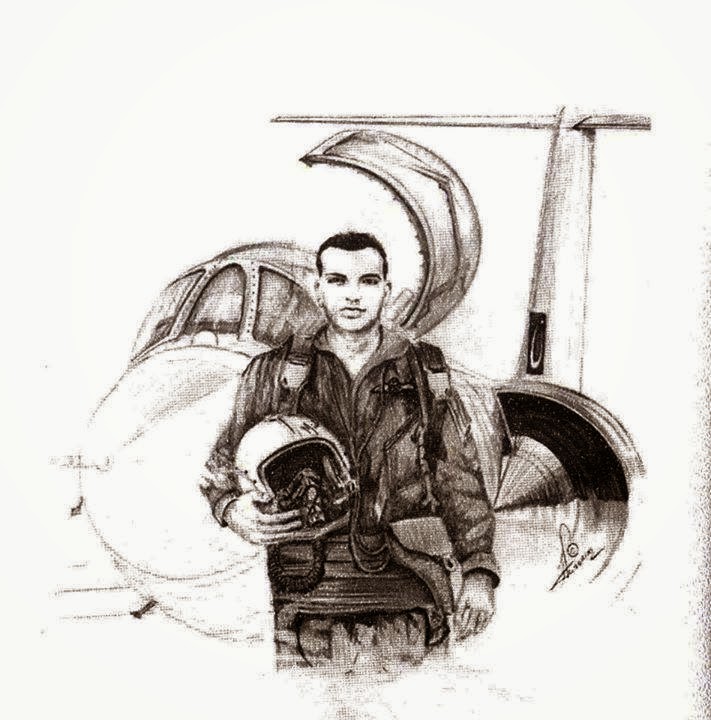 At Sargodha these aircraft re-equipped PAF’s No. 9 Squadron (Griffins, who today fly F-16s). This squadron is considered the oldest PAF squadron and was first established on January 3, 1944 at Lahore flying Hurricane IIC aircraft as part of the Royal Indian Air Force. The squadron was re-formed on August 15, 1947 just a day after Pakistan’s independence. In 1961 the squadron was the last operational unit still flying Sea Fury aircraft while all other PAF squadrons had converted to jets. Perhaps to compensate its oldest squadron for such neglect, it was decided by Air Headquarters to equip it with the first Mach 2 capable jet in PAF’s inventory. Sqn Ldr M Sadruddin took over as the squadron commander of the re-equipped 9 squadron with Flt Lt Alaudin Ahmed as his flight commander. Other early joiners included Flt Lt Jamal A Khan, Flg Off Farooq F Khan, Flt Lt Hakimullah, Flg Off M M Khalid, Flt Lt Arif Iqbal, Flt Lt Hashmi, Flg Off Amjad Hussain and Flg Off M Akbar. The squadron was at the same time joined by two US Air National Guard pilots, who along with the already converted first three PAF pilots helped convert other PAF pilots to F-104s. That PAF senior commanders literally lead from the front is demonstrated by the fact that the Air Marshal Asghar Khan (PAF C-in-C at the time) and some other senior officers attended the relevant ground school and undertook number of familiarization flights on the aircraft. The conversion course included 2-3 weeks of academic classes followed by a few rides in F-104Bs and final check rides in a single seater. Once the pilot was qualified, an initial training period consisting of 40-50 sorties commenced. This included navigation, formation flying, gunnery, air combat manoeuvring and interceptions. 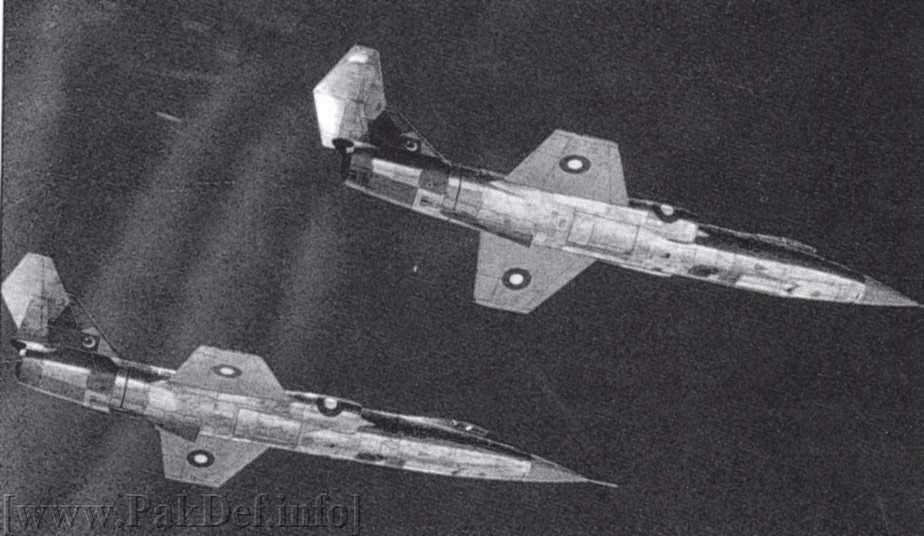 F-104s clearly surpassed the F-86F Sabres in PAF inventory in terms of performance and represented the cutting edge of aviation technology at that time. Although the Sabre was loved for its beautiful handling and manoeuvrability, Starfighter’s performance remained unmatched till the induction of F-6 and Mirage aircraft later in the decade. 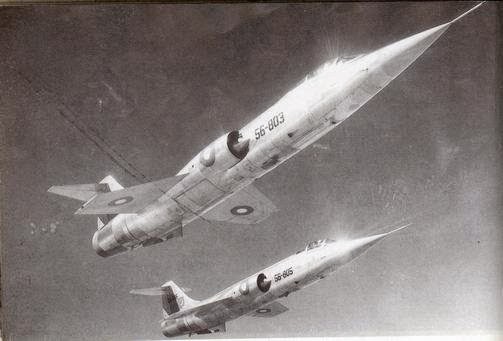 The aircraft’s sheer power and, if one could ascribe it a personality, is best illustrated by the mission profile for going to Mach 2. The first requirement for such a mission was to find outwhere the tropopause was on a particular day. This is important as the aircraft acceleration is quickest at this altitude and also met the requirement that the inlet air temperature did not go beyond 100 degrees centigrade. Once the tropopause had been determined the sortie could begin. The configuration for going Mach 2 meant a clean aircraft (no external tanks or air to air missiles. Even the launchers for the missiles and the pylons for the external tanks had to be removed.)

A standard subsonic climb at Mach 0.9 to the tropopause (generally around 37 to 40,000 feet in summer) was made. After leveling off and getting into the transonic regime at Mach 0.9 and level flight, full afterburner was selected and the acceleration to Mach 2 began. The acceleration was very rapid and going supersonic took only a few seconds and was hardly noticeable except for a quick flick of the Mach meter from 0.98 to 1.05. As the mach number increased so did the temperature of the air entering the intakes (because of friction of the air against the aircraft). For this reason the pilot had to monitor the movement of the shock cones and the intake air temperature. The shock cones moved forward automatically as the mach number increased so as to avoid the shock wave from entering the air intakes and causing a severe compressor stall. Also the pilot kept an eye on the inlet air temperature gauge as it rose towards 100 degrees centigrade maximum (with an increase in air temperature the air became less dense so the RPM automatically increased to 103%-103.2% max). This phenomena was called T2 reset. If the shock cones did not move forward, or the rpm did not increase to 103.2% as the temp reaches 100 degree the mission was to be aborted. Upon attaining Mach 2 the procedure for slowing down had to commence immediately or the airplane could accelerate well beyond Mach 2!!!. The deceleration maneuver was interesting as well. The pilot first shut down the afterburner (RPM still remained at 103.2% even if the throttle was reduced below 100%) and began a steep climbing turn with max available “G” which was about 3 “G” at this altitude so as to reduce speed below 1.6 mach. Once below Mach 1.6 the pilot applied speed brakes (opening speed brakes above Mach 1.6 was prohibited as this caused a sudden and violent aircraft nose drop which could cause a compressor stall). By the time the aircraft slowed down to below Mach 1.6, it would have climbed to above 45,000 to 47,000 ft. The pilot had to be careful not to cross 50,000 feet without a pressure suit. Once the airplane was below Mach 1.6 the rest was routine. The inlet shock cones began retracting and the inlet temperature reduced below 100 degrees and the RPM dropped back to 100% or lower depending on the throttle position. 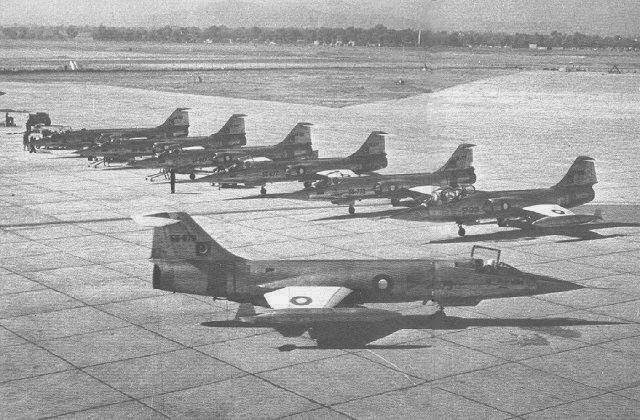 F-104’s clean profile meant quick acceleration on takeoff and the pilots had to be quick with retracting under-carriage as the maximum allowable speed of 240 knots for undercarriages down was reached very quickly. That the gears retracted within 3 seconds of selection, was another small but impressive feature of the aircraft. In case the pilot did exceed the maximum allowable speed for gear down, then he had to enter a steep climb to bleed speed and reach the 240-knot figure. 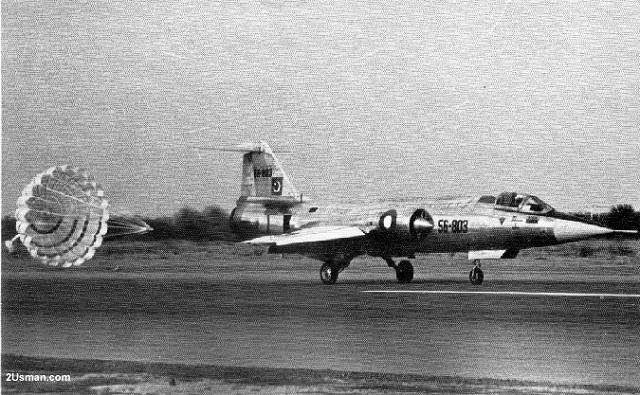 Starfighter’s thin wing aerofoil and high wing loading left little room for mistakes at low speed. The Starfighters had to be landed at minimum 150 knots IAS (with engine RPM at 88-90% during landings). The aircraft required careful handling, although features like the Auto Pitch Control (APC, also known as kicker) helped by automatically deflecting elevators for nose down position if the pilot pulled the aircraft to a high Angle of Attack. The APC was prevented from engaging when gears and take-off/landing flaps were engaged. Other impressive features included Boundary Layer Control which allowed flaps to function at high deflection angles and the very powerful M61 Vulcan cannon which fired 20mm shells at the rate of 66 per second[iv]. The latter though resulted in high usage of electrical power requiring engine RPM to be at least 96% when firing. In fact, later during the 1965 war on at least one occasion an F-104 lost both generators and therefore total electric power, when Flg Off Abbas Mirza fired his gun during a night blind intercept of an IAF Canberra. 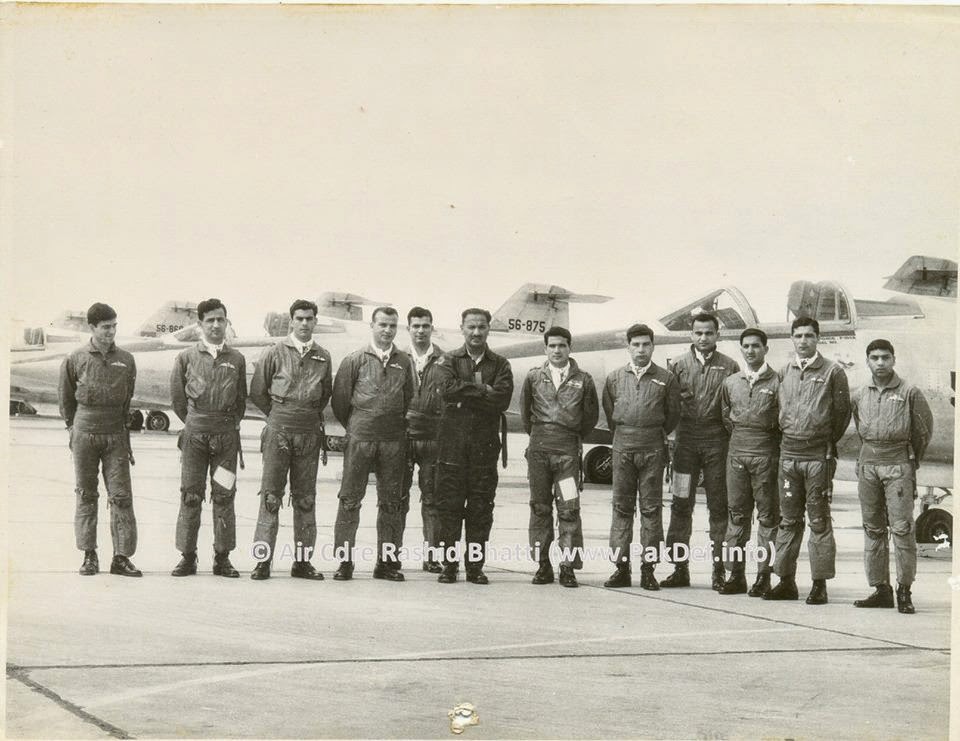 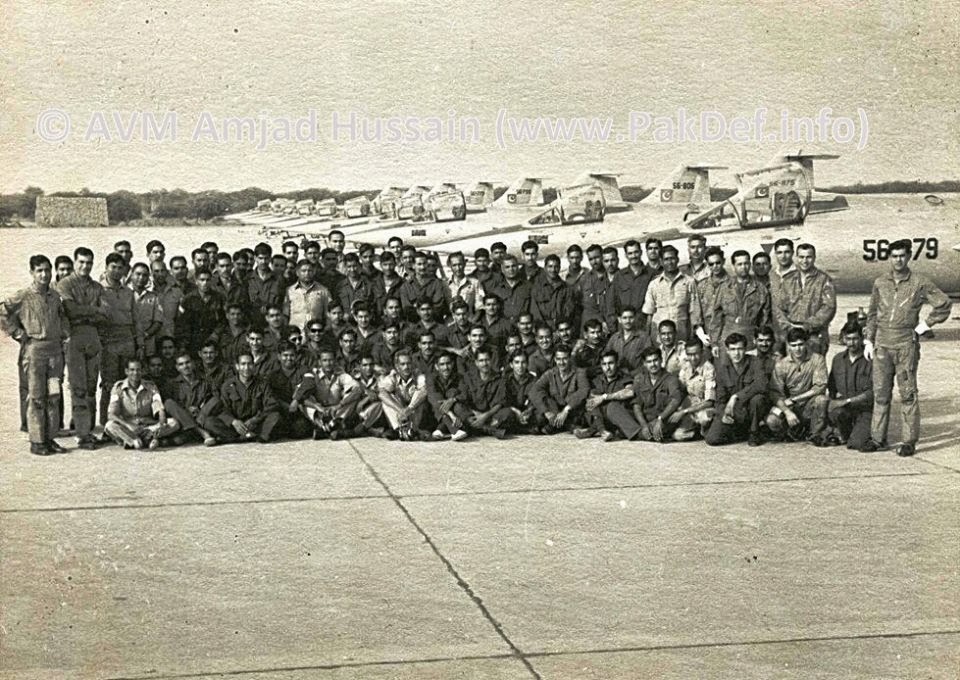 Posted by Sarmad Hassan Sharif at 10:06 AM

Sarmad Hassan Sharif
By profession, I'm a geophysicist working in a petroleum exploration company in Islamabad. Since my childhood nationalism, patriotism and love for the armed forces was in my blood. The reason was that this patriotism was gifted to us by our elders, and the media at that time also played a very positive role in portraying our armed forces. Days like 23rd March (Pakistan Day) and 6-7-8 September (Defence Day) were properly celebrated. Whenever a PAF jet fighter aircraft flew above me, it filled my heart with pride, and my passion and love for the airforce grew stronger. But in the present decade, majority of the young generation has drifted very far. Neither they care about nationalism, and patriots are regarded as fools. The media has stopped playing any major role, and days like 'Pakistan Day' and 'Defence Day' go unnoticed by many. To re-ignite patriotism and love for the airforce, i decided to share whatever i know with the young generation, so they can get to know their airforce better, and have the faith that their airforce is still strong enough to fight and has the ability to hit hard.